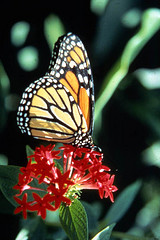 The country’s most visited protected area showcases a natural marvel and mark your calendar — butterfly season lasts from November to March.

Sanctuaries in the states of Mexico and Michoacan open their tourist services to the public from November to March. These protected areas include el Rosario, Chincua, Cerro Pelon in Donato Guerra, Herradura and La Mesa. The first two are in the state of Michoacán and the last three are located in the State of Mexico. Check ahead of time for reservations.

Travelers’ Tips
The easiest sanctuary to visit is El Rosario. Transportation is arranged from the towns of Ocampo and Angangueo, the latter an old mining town with an interesting history.

Angangueo
Angangueo is a great place for hiking and biking, regardless of whether it is the Monarch butterfly season.
The town has an old train station recently restored as the beginning of the newly-installed Monarch Green Way, a four-kilometer trail connecting two stations; this might be the beginning of a national rails to trails network in Mexico. Any one can bike it but there is no bike rental. One great trip is bike downhill to Zitacuaro.

The price of silver bottomed out in the early 1980s, forcing many residents of Angangueo to look for work elsewhere. The town currently has 5,000 residents, down from 18,000 in 1987. Tourism hasn’t been enough to restore the town’s former glory, but each weekend from November to March, the town is full of tourists who come to see the monarchs.

In the sanctuary, you will find a place to purchase tickets and contract a local guide. The hike uphill is strenuous and will take anywhere from two to three hours. You will likely find dead monarchs on the ground before you spot the main colonies. On overcast days the butterflies cling to oyamel trees. At times, branches break under the weight of hundreds of thousands of butterflies. 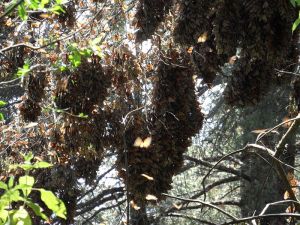 The sight of butterflies blanketing the trees is beautiful, but not as majestic as when they glide through the forest. When the sun comes out and the temperature warms, the butterflies drop from the trees to fly and drink nectar from flowers and dew collected on the ground. In the spring, as the days get longer and the temperatures rise, the monarchs begin their northward flight, deserting the forests until the following autumn.

The best time to visit is between February and early March, but the butterflies can be seen anytime after December. The park receives a flood of visitors — 150,000 to 250,000 each year. To relieve the pressure on the park as well as to introduce economic benefits to other communities, officials have opened additional areas to the public, such as Chincua, also accessible from Angangueo. If you go to El Rosario, travel during midweek when the human traffic is lighter.

Toward the end of butterfly season, end of February, early March, the towns of Angangueo, Ocampo, Zitácuaro and others host a regional festival, with music, dance and recitals.

History of Tourism
The Central Mexican valleys where the monarch butterflies winter were ‘discovered’ in 1974 when researchers traced the butterfly’s flight path from Canada. The news made the covers of National Geographic and Scientific American, which ran startling photographs of great trees veiled with thousands of monarchs. Of course, local residents of Angangueo knew of the monarchs, which at times would blanket the town. Now that the world was clued in, the town of Angangueo would begin its own metamorphosis.

The park, one of Mexico’s most prominent environmental attractions, is also one of its least understood. It seems incredible that few services exist for the eco traveler interested in conservation. Worse, the tours that do exist are aimed at day-trippers who generally pack their own lunches. In other words, the flood of tourists visiting the park provides few economic benefits to the community. So if you’d like to contribute to the conservation of the region, spend a night or more.

Who visits? The vast majority of tourists are Mexican. Foreign tourists account for less than five percent of total visitors. 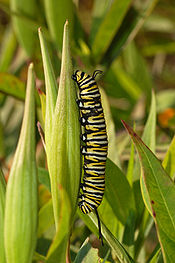 Life Cycle of a Monarch
Monarchs go through four separate life stages. They begin as an egg, hatch as larva or caterpillar, become pupa (chrysalis), and mature into adult butterflies. The eggs hatch in small batches of five to ten, depending on the ambient temperature. The caterpillars devour their eggshells and begin the quest for food, feeding exclusively on the milkweed family. Each time they outgrow their exterior skin (called a cuticle), they molt, eat the skin, and continue growing. After four cycles of molting, they attach themselves to the underside of a leaf and form a delicate and beautiful chrysalis. Inside the chrysalis, a developing butterfly matures for several weeks. When it’s time to break loose, the insect pushes its legs downward, splits the chrysalis and sets itself free. The newly hatched butterfly pumps the fluid concentrated in its body into its wings, which then harden, allowing it to fly.

The butterflies then begin a migration north to spend their summers in Canada and the United States.

They mate several times and live from two to six weeks. Then, new, non-reproductive butterflies hatch. The reproductive butterflies remain in the north, and the migratory ones head south, averaging 150 to 200 kilometers (90 to 125 miles) a day. Their life span is considerably longer– 9 months longer– than their counterparts’. The trip takes 1/2 month, two if winds or rain slow the butterflies’ journey. This is considered one of the longest, greatest migrations in the natural world.

Why the butterflies, several generations removed from the ancestors that once wintered in the valley, migrate to the same place is a mystery. It has been suggested that regional magnetism stemming from nearby mountains (remember, this is a former mining town) emits what in essence is a homing beacon for the monarchs. 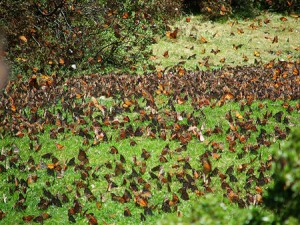 Monarchs on the move

North American Bug
In one of the most spectacular migrations in the world, the butterflies migrate from forests in the United States and Canada to this area of Central Mexico. Hence, they are considered a symbol of the North American Free Trade Agreement (NAFTA).

They are also a symbol of a lackluster commitment to the environment. While Mexico’s 1986 presidential decree set aside five protected areas, two have been mostly, or completely, deforested. The other reserves are showing signs of stress due to clandestine logging. As the reserve expanded from 45,000 acres to more than 132,000 acres, the government has offered farmers who live in extreme poverty few economic incentives to save the trees.

What’s surprising about the lack of commitment is that the reserve is located in the principal watershed supplying water to two of the country’s largest cities, Mexico City and Guadalajara, as well as Chapala Lake.

Threats to the Monarchs
In early 1997, an extended freeze killed many of the wintering monarch butterflies. Initial reports of a 33-percent death rate shocked the nation and the world, but the actual death rate, according to scientists, was less than 7 percent, well within the normal range of variability.

Ever-present threats to the monarchs include continued destruction of forest habitats and environmental changes along their migration paths throughout Mexico, the United States, and Canada. Farmers in the United States and Canada have declared milkweed (the plant that nourishes monarchs) a noxious weed and use herbicides to control it, resulting in reduced availability of the butterflies’ major food source and place to lay their eggs. While the monarchs may not be endangered now, their survival depends on the cooperation of all three countries in North America.

Alternatives
Better efforts must be made to assist poorer communities if conservationists want local residents to protect the monarchs. Environmental groups have suggested that the campesinos receive an annual fee for the conservation of the trees in these forests.

According to economist David Barkin: “With the unraveling of the peasant economies, as a result of policies to promote ‘rural modernization,’ impoverished communities throughout the watershed are no longer able to implement the conservation programs they traditionally undertook. Consequently, the volume of rain water captured for urban and industrial use is actually declining.”

Barkin proposes the creation of a regional resource management plan that would compensate the communities to enable them to once again carry out these conservation activities. If campesinos were paid even a small amount to protect these forests, rather than the small income they make from destroying them, this reserve might stand a chance of protecting the monarch butterfly.

Visiting?
El Rosario is 210 kilometers (130 miles) west of Mexico City, in the state of Michoacán. Nearby is Toluca.

Transportation: From Mexico City, direct buses leave several times a day from the Terminal Poniente bus terminal (at the Observatorio Metro station) for Angangueo. If you miss that bus, take a bus to the larger town of Zitácuaro and make the switch to an Angangueo bus from there; buses leave every 15 minutes. Drivers will take Highway 15 West. There is a turn-off at Zitácuaro and take Highway north to Angangueo.

Angangueo is the best developed hub for travel in the reserve. Once you’re in town, if you don’t have your own transportation find other travelers interested in seeing the butterfly sanctuary and rent a pickup. Prices are fixed by a local cooperative, and the 4- to 5-hour tour costs $25, depending on the type of vehicle. This price is good for up to ten passengers, so it’s obviously cheaper if more people split the cost of the vehicle. If you drive, there is ample parking at the reserve. From Angangueo you can also travel to Chincua, another reserve on the Michoacán–Mexico state border, which opened to the public in late 1996. A second option is to travel to Ocampo, which also has a small road to El Rosario.

Tip: Weekends are crowded. A more quiet time to visit the sanctuary is during the week.

about the author
Ron Mader is the ecotourism and responsible travel correspondent for Transitions Abroad and host of the award-winning Planeta.com website.

This entry was posted in Ecology, Flora & Fauna, Planet Earth, Things to do and tagged Angangueo, Estado de Mexico, Michoacan. Bookmark the permalink.
%d bloggers like this: