by http://www.cancun.travel
(photos via: FootPrints)

There is a plethora of beautiful nature reserves and protected areas you can visit near Cancun. You will get the opportunity to observe monkeys, flamingos, whale sharks, marine turtles, crocodiles and many more creatures in their natural habitat. The flora and fauna is also incredible! You can arrange guided tours lasting from one day to several days where you can pursue activities such as kayaking, hiking, snorkeling and diving.

Cozumel is the Caribbean’s premier dive spot with 85% of the region’s dive sites.

Isla Mujeres West Coast, Punta Cancun and Punta Nizuc National Park
The area was decreed a national park on July 19, 1996. It covers 8,673 hectares (21.431 acres) of reefs that are part of the Mesoamerican Reef System. The estimated age of the base coral is 125,000 years and the reef consists of a chain of coral formations of varying sizes. The park protects a triangle of reefs off the west coast of Isla Mujeres, Punta Cancún and Punta Nizuc.

Isla Contoy National Park
The island, covering 5,126 sq. hectares (12.667 sq. acres), was declared a National Park on February 2, 1998. The coral reefs within the park’s perimeter -called an “islet”- are located south of the island and mark the beginning of a 389-kilometer (242 miles) barrier reef running along the coast of Quintana Roo. This is the birthplace of the Mesoamerican Reef System. Contoy is located 18 miles north of Isla Mujeres. 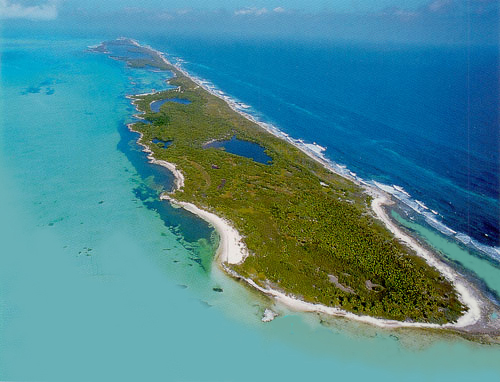 A platform reef, it has the largest commercial population of pink conch and Caribbean lobster and is important for the fishing industry. It is also a sea turtle nesting ground and at least 93 bird species live in the area’s mangroves.

The reef is a fantastic spot for divers. It is also a magnet for scientists who study its biodiversity and underwater archaeological heritage (there are more than 20 shipwrecks here).

They incorporate areas of the principal ecosystems found in the Yucatán Peninsula and the Caribbean, where both Mesoamerican and Antillean species flourish.

Manateee Sanctuary
Created on October 24, 1996, the Manatee Sanctuary protects 281,320 square hectares of both land and water ecosystems. The largest population of Caribbean manatee (Trichechus manatus), estimated between 150 and 200 individuals, has found a refuge here.