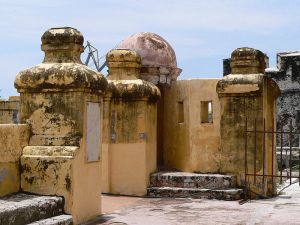 The value enhancement of San Juan de Ulua Fortress in Veracruz Port, one of the priority projects of the National Institute of Anthropology and History (INAH) will undergo soon its second stage, which includes work as the integral restoration of Casa del Gobernador (Governor’s House) and the faces at Plaza de Armas, currently out to tender.

This was announced by architect Salvador Aceves Garcia, adviser to the INAH General Direction at the first day of activities of the 9th Encounter for Revitalization of Historical Centers, taking place in Mexico City from October 18th to 20th 2010 with the participation of experts from Cuba, Chile, Spain and Italy.

Besides intervention to emblematic spaces of San Juan de Ulua Fortress, the expert pointed out that integral rehabilitation of the building is to be finished. After reinforcing the foundations of the fortress, mortar will be injected in the hollows present in the bottom of bastions.

Aceves mentioned that the project involves recovery of nearby spaces currently used as warehouses and shipyards so the historical monument recovers all its value.

He recalled that for over 4 centuries there was a continuity of constructive material and systems; nevertheless, in the mid 20th century, steel and reinforced concrete were used but they were not compatible with the historical structure and the environmental conditions.

In this sense, architect Saul Alcantara Onofre, director of Technical Support at INAH National Coordination of Historical Monuments, declared that strategy to recover San Juan de Ulua was based in different criteria, among others, the use of natural material of proved resistance and durability; consolidation and restoration of architectural elements that presented instability, as well as liberation from structures that distorted its interpretation as an antique building.

Under these premises have been recovered spaces such as Plaza de Armas, which was re-leveled to end with flooding. “Work has been conducted with the aim of improving the character and quality of open spaces that define the personality of the monument, using stone material based in the reticule pattern found at the square exploration,” mentioned Alcantara.

During the first day of activities of the encounter organized by INAH and Centro Cultural España, the rescue of the cover and patio of Casa del Gobernador, as well as San Crispin Garitones (sentry boxes).

Other important aspect is to prevent flooding that could destroy the fort. A network of rain water channels has been designed based in the old drainage, to discharge in a great sump. With Dutch technology, it will discharge the water into the sea.