If not otherwise stated, this article’s content refers specifically to the pitayas of Hylocereus species, or “dragon fruit.”

Distribution
The vine-like epiphytic pitaya-producing cacti of the genus Hylocereus are native to Mexico, Central America, and South America. Currently, they are also cultivated in East Asian and Southeast Asian countries such as Indonesia (especially in western Java), Taiwan, Vietnam, Thailand, the Philippines, Sri Lanka, Malaysia, and more recently Bangladesh. They are also found in Okinawa, Hawaii, Israel, northern Australia and southern China.

Hylocereus blooms only at night; the large white fragrant flowers of the typical cactusflower shape are among those called “moonflower” or “Queen of the Night.” Sweet pitayas have a creamy pulp and a delicate aroma. It is also grown as an Ornamental plant, used in gardens as a flowering vine, and a house plant indoors.

Varieties
Selling dragon fruit juice in Thailand Stenocereus fruit (sour pitayas) are of more local importance, being commonly eaten in the arid regions of the Americas. They are more sour and refreshing, with juicier flesh and a stronger taste, and are relished by hikers. The sour pitaya or pitaya agria (S. gummosus) in the Sonoran Desert has been an important food source for Native Americans. The Seri people of northwestern Mexico still harvest the highly appreciated fruit, and call the plant ziix is ccapxl – “thing whose fruit is sour.” The fruit of related species, such as S. queretaroensis and the dagger cactus (S. griseus), are also locally important food. Somewhat confusingly, the Organ Pipe Cactus (S. thurberi) fruit (called ool by the Seris) is the pitahaya dulce (“sweet pitahaya”) of its native lands, as dragon fruit are not grown there in numbers. It still has a more tart aroma than Hylocereus fruit, described as somewhat reminiscent of watermelon; it has some uses in folk medicine.

Fruits of some other columnar cacti (mainly Cereeae) are also called “pitayas” – for example those of the Peruvian Apple Cactus (Cereus repandus), which are very rare.

Cultivation
After thorough cleaning of the seeds from the pulp of the fruit, the seeds may be stored when dried. Ideally, the fruit must be unblemished and overripe. Seeds grow well in a compost or potting soil mix – even as a potted indoor plant. Pitaya cacti usually germinate between 11 and 14 days after shallow planting. As they are cacti, overwatering is a concern for home growers. As their growth continues, these climbing plants will find something to climb on, which can involve putting aerial roots down from the branches in addition to the basal roots. Once the plant reaches a mature 10 lbs weight, one may see the plant flower. 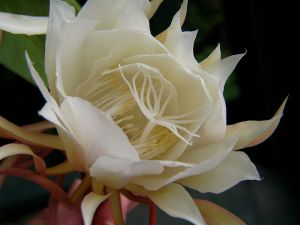 Pitaya cacti flower overnight, usually wilting by the morning. They rely on nocturnal creatures such as bats or moths for fertilization by other pitaya. Self-fertilization will not produce fruit. This limits the capability of home growers to produce the fruit. However, the plants can flower between three and six times in a year depending especially on growing conditions. Like other cacti, if a healthy piece of the stem is broken off, it may take root in soil and become its own plant. This is a much shorter route to reproduction. The plants handles up to 40 °C (104 °F) and very short periods of frost, but does not survive long exposure to freezing temperatures. The cacti thrive most in USDA zones 10-11, but may survive outdoors in zone 9a or 9b.

Hylocereus has adapted to live in dry tropical climates with a moderate amount of rain. The dragon fruit sets on the cactus-like trees 30–50 days after flowering and can sometimes have 5-6 cycles of harvests per year. There are some farms in Vietnam that produce 30 tons of fruit per hectare every year.

Pests and Diseases
Overwatering or excessive rainfall can cause the flowers to drop and fruit to rot. Birds can be a nuisance. The bacterium Xanthomonas campestris causes the stems to rot. Dothiorella fungi can cause brown spots on the fruit, but this is not common.

* Hylocereus undatus (red pitaya) has red-skinned fruit with white flesh. This is the most commonly-seen “dragon fruit.” 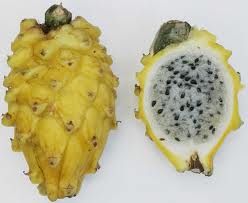 Early imports from Colombia to Australia were designated Hylocereus ocampensis (supposedly red fruit) and Cereus triangularis (supposedly yellow fruit). It is not quite certain to which species these taxa refer, though the latter is probably the red pitaya.

The fruit can weigh from 150 to 600 grams; some may reach one kilogram.

Consumption
To prepare a pitaya for consumption, the fruit is cut open to expose the flesh. The fruit’s texture is sometimes likened to that of the kiwifruit due to the presence of black, crunchy seeds. The flesh, which is eaten raw, is mildly sweet and low in calories. The seeds are eaten together with the flesh, have a nutty taste and are rich in lipids, but they are indigestible unless chewed. The fruit is also converted into juice or wine, or used to flavour other beverages. The flowers can be eaten or steeped as tea. The skin is not eaten, and in farm-grown fruit it may be polluted with pesticides.

Ingestion of significant amounts of red-fleshed dragon fruit (such as Costa Rica Pitaya) may result in pseudohematuria, a harmless reddish discoloration of the urine and feces.

Taste
The mild taste of pitaya flesh is often remarked upon, as it stands in stark contrast to the vibrant exterior. The taste has been described as being “very bland… like a melon or kiwi,” with a “mild sweetness.”

Nutritional Information
The edible parts of raw pitaya consist of mostly water and carbohydrates, with some protein and fat content. Pitayas contain slight amounts of calcium, iron, phosphorus, and other nutrients.

Uses
* Particularly red-skinned pitayas are a good source of Vitamin C.
* Pitayas are rich in fiber and minerals, notably phosphorus and calcium. Red pitayas seem to be richer in the former, yellow ones in the latter.
* The seeds are rich in polyunsaturated fatty acids, and in particular Red Pitayas contain very little saturated fat.
* Pitahayas also contain significant quantities of phytoalbumin antioxidants, which prevent the formation of cancer-causing free radicals.
* In Taiwan, diabetics use the fruit as a food substitute for rice and as a source of dietary fiber.
* Pitaya supposedly increases excretion of heavy metal toxins and lowers cholesterol and blood pressure. Eaten regularly, it is credited with alleviating chronic respiratory tract ailments.