Merida-Matronly Madame of the Yucatan 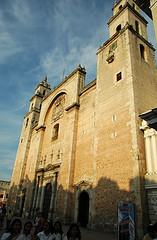 As a longtime resident of the Riviera Maya it’s easy to be lulled into thinking that Mexico is a mirror-image of its well-heeled neighbor to the north. Just take a look at Cancun’s elegant high-rise hotels, chain restaurants, and shopping malls. Blink your eyes and it’s easy to think you’re not in Mexico after all.

But a three-hour drive by superhighway due east of Cancun to the colonial city Merida shatters all illusion that any similarities exist between Cancun and what I call real Mexico.

Although mornings start slowly here, by midday throngs of people crowd the sidewalks, sometimes four-deep with passers-by. At five feet, four inches I tower over everyone I encounter. The tranquil dignity of the indigenous Maya is everywhere. 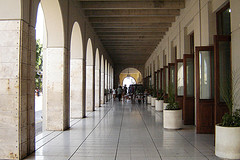 As I walked several blocks from my hotel to Plaza Grande, the zocalo, a must-see in any Merida itinerary, I hugged the shady side of the street as the locals do, hoping for some relief from the merciless sun.

COLONIAL ARCHITECTURE
Downtown Merida brims with Spanish colonial architecture and is protected by some of the most rigid preservation regulations in Mexico. Founded in 1542 by Spanish conquistador Francisco de Montejo who left his indelible mark here, (though not kindly), one historic city block, the Plaza de la Independencia, on Calles 60, 61, 62, 63 crams in more 16th century architectural wonders than can be imagined.

Montejo’s former palace, Casa de Montejo, sits on the south side of the plaza, the exact spot where the former ceremonial center of the post classic Maya city, Th’o, stood. Montejo ordered the temple destroyed and used the ancient stones for the building of his lavish home, which has now been converted, to a bank. 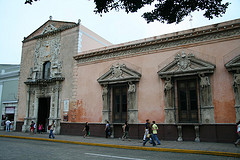 The Palacio Municipal (City Hall) on Calle 62 stands on the plaza’s west side. Built in the 1850s it still serves as government offices. The north side is home to the restored Governor’s Palace, which serves as executive headquarters for the Yucatan. Walk past imposing military guards into an enormous tiled courtyard, which yields massive murals (4 meters by 12.6 meters), painted by Yucatan’s famous artist, Fernando Castro Pacheco. In muted earth tones these imposing paintings tell the story of the Yucatan. The courtyard is usually uncrowded plus it’s cooler than the street outside and a nice respite from the Yucatan heat.

Catty-corner to the Palacio Municipal on the north side of the street is the oldest church in Mexico, Catedral de San Idelfonso. Construction on the church began in 1561 and the church was designed in Renaissance style. Wander into its cool, damp darkness and gaze at the modest wooden altar and simple wood benches.

On the sides of the aisles, grave markers display the names of the faithful on cement stones, polished smooth by years of wear. Set far back from the street the cathedral’s presence looms large on the square and the bell tower chimes loudly and languidly on the hour. 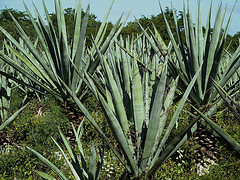 GREEN GOLD
Although most of Mexico’s colonial cities are located in central Mexico and owe their heritage to the mining of silver, copper, gold, Merida gained its wealth not from a mineral source but from the green gold of henequen, also known as agave.

Merida exploded in the late 1800s, so great was the need for henequen which was snapped up to make Panama hats and rope. This demand spawned the growth of over 300 haciendas where agave was grown and processed. Many haciendas were owned and managed by French immigrants who built Victorian style mansions on Paseo de Montejo, Merida’s grand old tree-lined boulevard, where the clip-clop of horses’ hooves can still be heard today, pulling carriages (calesas) that charm many a tourist.

NEW WAVE OF IMMIGRATION
Immigrants still swarm to Merida but today they’re a different breed: baby boomers from both the U.S. and Canada who are attracted not only to Merida’s colonial charms, but to the affordable prices that can be found in Mexico’s interior. And who can blame them? This historic city has much to offer.

A proud dignity permeates throughout the state, and you sense a difference as soon as you cross the state line from Quintana Roo into Yucatan. Not only in the smooth new asphalt roads and the absence of litter, but in the apparent pride when you ask someone if they’re from Merida. “Soy Yucateco,” (I am Yucatecan) serves as a motto as much as a birthright. 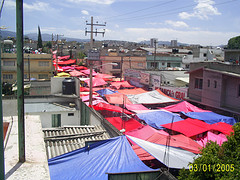 MERIDA A DOMINGO
On Sundays, Merida hosts a fair on the plaza with streets blocked off to traffic. Every type of Yucatecan product can be found: embroidered dresses and Mayan huipiles, guayabera shirts, wood and stone carvings, silver jewelry, pottery, handmade tablecloths, hand-strung hammocks from nearby pueblos. Roving mariachi bands wander by strumming familiar Mexican ballads, and oftentimes seating will be set up for hundreds of people for some city celebration, complete with 30-foot scaffolding to hold gigantic speakers which will be put to good use.

While enjoying Merida a Domingo as the Sunday celebration is known, wander over to popular Parque Hidalgo (Calle 59 at 60) where hoards of food vendors and more artisans crowd this popular square. In front of the historic Gran Hotel, the city’s oldest, a stage is set up for singers, comics, clowns and mimes who entertain the large group of locals who attend the weekly Sunday activities.

By day vendors sell handicrafts, toys and balloons and at night young lovers drift out of the shadows for a romantic rendezvous. Here, the world truly is a stage, and Merida never lets you forget you are truly in Mexico.

Like an elegant society matron known for her unerring social graces, the city of Merida is a breed apart. She never stops, she never loses her dignity, and she never fails to charm.

IF YOU GO:
The historic Gran Hotel on Parque Hidalgo, Calle 60, No. 496, Centro, has 25 rooms and seven suites. Although a bit dated, some rooms are very large, furnished with wonderful old period piece furniture. Take a peek first before committing to a room. There’s a restaurant downstairs on the terrace, all rooms have a/c, and there’s free parking. Opt for one of the corner suites which have small balconies and are worth the extra pesos. You’ll have a great view of the park. May be a bit noisy on weekends, so ask for a higher floor.
Telephone: 999/923-6963; http://www.granhoteldemerida.com.mx

InterContinental snapped up the art nouveau Villa Mercedes and converted it to a medium size hotel with both guestrooms and suites. More modern than many Merida hotels, the IC includes a restaurant, room service, a/c, swimming pool, business center, internet and gym. Some suites have Jacuzzis or hot tubs. It’s a relaxed atmosphere at good rates for what you get.
Located at Calles 60 and 62, just off Paseo Montejo at Av. Colon.
Telephone: 999/942-9000, http://www.intercontinental.com

Restaurants in Merida are wildly varied in offerings and price.
A few suggestions you might enjoy:

Alberto’s Continental Patio serves both Lebanese and continental cuisine by two now elderly brothers who have housed their entire collection of eclectic regional artwork within the two rooms of the restaurant and on the romantic patio where an oversized rubber tree shades diners midday. It’s certainly worth a look and a cocktail if nothing else. Definitely one of a kind. The courtyard at night is mesmerizing. Calle 64 at 57, Centro. Telephone: 999/928-5367.

Los Almendros is a Merida institution for Yucatec food. The stiffly dressed waiters have that distinct air of ennui and dominate the austere, high-ceilinged dining room. Menus have point and pick photos and the prices are remarkably reasonable. Calle 50 between Calle 57 and 59. Telephone: 999/928-5459. They also have another restaurant in Hotel Fiesta Americana, not quite so fussy, at Av. Colon near Paseo Montejo. Telephone: 999/942-1111.

La Bella Epoca has tiny private balconies overlooking Parque Hidalgo and is a romantic treasure in a restored mansion with both Maya and continental cuisine. Weekends are especially nice as the street below is closed to traffic. Call ahead for balcony seating. Calle 60 between Calles 57 and 59. Telephone: 999/928-1928.

Jeanine Kitchel, author of Where the Sky is Born: Living in the Land of the Maya, lives in Puerto Morelos.

This entry was posted in Colonial cities, Culture, Gastronomy and tagged Merida, Mexico, Yucatan. Bookmark the permalink.
%d bloggers like this: